If you’re looking for a lightweight and inexpensive tent, then look no further – It’s time to buy a pup tent. Confused?! You are probably asking – What are pup tents? Is it meant for a dog?! We will answer that later.

Basically, Pup tents are simple design tents that were previously used by only military personnel. But with advancement, it had enough improvements to be used for camping purposes. It is a small, in general, one-person tent that is meant for campers who want to travel light.

Nowadays, you can find that a pup tent comes with a lot of comforting features, such as doors, waterproofing quality, mosquito net, proper flooring, etc. Being just 4ft tall and 5ft wide, it occupies the least space on the campground. And, yes, you can also use the tent for your pet to sleep in, as its alternative usage option.

This article will discuss how to select the best tent for your needs, and the features to consider before buying. By the end of the article, you will have all the information you need to make an informed decision.

What Are Pup Tents?

A pup tent is a very compact tent that is used by hikers and campers. It can be easily stored in a backpack and is lightweight. These tents are ideal for one or two people and are commonly made of waterproof fabric and come with a mosquito net. Pup tents are not suitable for family camping but are great for light travel and camping.

While pup tents are typically used for camping, they can also be used for other purposes, such as providing shelter for a pet during a disaster. In fact, many people keep a pup tent in their car in case of an emergency.

What are Military pup tents?

Military pup tents are larger versions of normal pup tents and are designed to accommodate two soldiers. The two pieces of the shelter are connected using buttons or snaps and form a pitched roof. Each soldier carries one-half of the shelter in a backpack. They then work together to assemble the entire shelter. Military pup tents often do not have a front flap. This allows the soldiers to observe activities outside the tent.

Why is it named the “Pup” tent?

A pup tent is a lightweight, small tent typically used for camping. The name “pup” comes from the tent’s resemblance to a dog house.

Pup tents were first used by the military, but they have become popular among campers and hikers in recent years. They are easy to set up and take down, and they are very compact, making them ideal for backpacking trips.

What are the features of a pup tent?

Pup tents have come a long way since they were first introduced. Today’s pup tents are made from high-quality materials and are designed to be comfortable and durable. They are an essential piece of gear for any camper or hiker.

A pup tent is a small, lightweight tent for one person. It was originally made by soldiers during the Revolutionary War to use minimal materials for shelter. The tent is usually not taller than five feet and is made with two poles. Originally, pup tents were not equipped with a roof, but modern versions have a door and waterproof material to keep out the rain.

The pup tent evolved over time due to its popularity in military operations. Military personnel often needed a small and lightweight tent to be able to move from one place to another. The original design was made of canvas, which rotted easily and was difficult to repair in harsh weather. Soldiers often propped up their tents with rifles or sturdy tree branches. During the Second World War, military troops began to use pole frames to support their tents.

The Uses Of The Modern Pup Tent

The modern tent has many uses, from providing shade and shelter at the beach to providing communal space at a campground. A Pup tent is also useful for car camping, providing comfort and space while on the road. Depending on the size of the tent, it can be used for a single person or two.

The main feature of a modern tent is its ease of setup. A simple two-person a-frame tent is lightweight and packs down small. These tents are often used for backpacking or ultralight backpacking trips. They’re similar to the way a tarp is set up and have a rainfly and canopy. However, they’re typically not big enough for more than two people.

How to choose a pup tent for your pet?

Before you start shopping for a pup tent, take some time to think about your pup’s specific needs.

Tents have been used as temporary homes for centuries. They have been used by nomadic people all over the world. Native Americans, Mongolian tribes, Tibetans, and Bedouins have all used tents.

Pup tents are nothing new, rather they have a strong historical background that is quite impressive. So, if you plan to go on a camping trip, do not forget to consider the option of having a pup tent that requires minimal effort. Happy Camping! 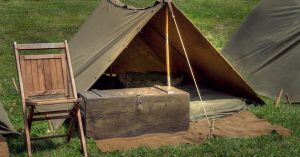 What are Pup tents? Can you use it for camping? [Explained]

If you’re looking for a lightweight and inexpensive tent, then look no further – It’s time to buy a pup tent. Confused?! You are probably

Hello there, and welcome to “OutdoorsFan”. As the name suggests, this website will help you understand the various aspects of outdoor camping, the basics, tips from a to z knowledge about camping.